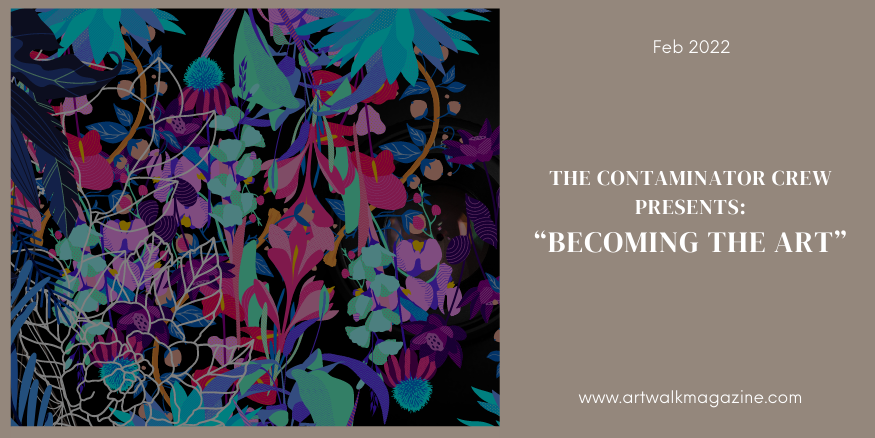 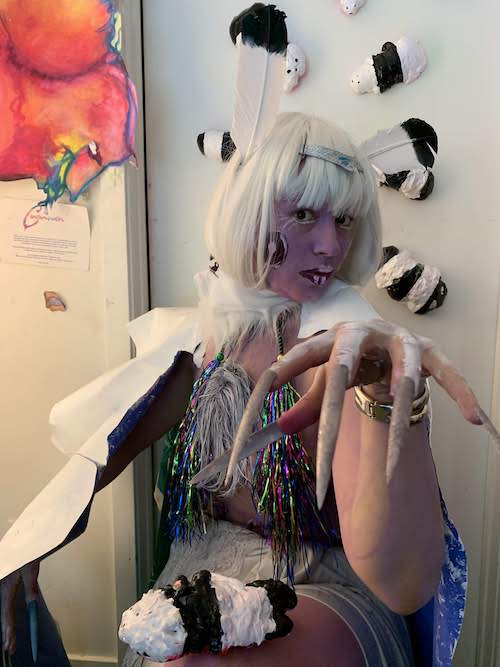 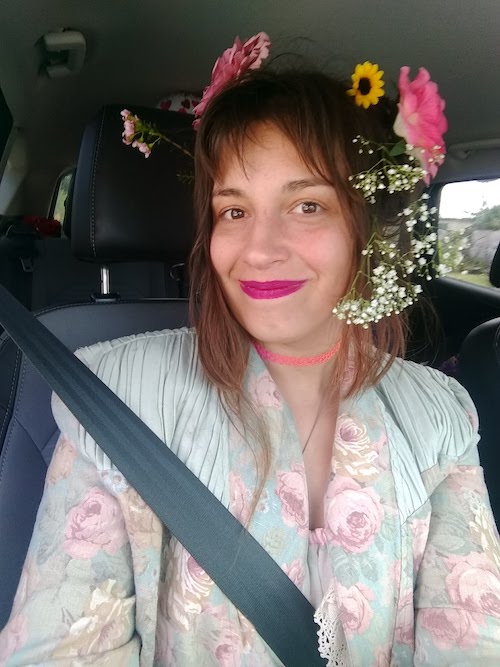 I laid in a random-ass field in Toledo Ohio topless behind an ongoing church service near some goats chomping on The Contaminator-inspired jackfruit sandwich that my homegirl Natalie delivered to us from the former The Bleakhouse Coffee where The Contaminator Crew‘s first solo show appeared in July 2017. The chef got inspired by the bright aesthetic that my oil pastels offer and the next thing I knew I inspired a (best selling at the time) vegan brunch menu with an illustration of The Contaminator from another artist. I knew of the location due to delivering un-bought organic foods to the food pantry near the very animated goats while volunteering for Foods Not Bombs run under my homie Eric at the time.

I dove my mouth in the bright purple cabbage as the BBQ jackfruit french-kissed my face. As we talked bout artistic expression, I was secretly hoping I didn’t get arrested and labeled as a sex offender just because I wanted my nipples to touch the sun in nature while near some goats as we had our weirdo picnic. After spilling too much metaphysical information, as usual, Natalie said something along the lines of; “You are a walking form of art. It’s not your drawings or shows, YOU, are the art.” I never really thought of my entirety as art because the eclectic shit I did on the daily was just my norm. A lot of my work at the time was so over-thought due to trying to prove something. Could just living as yourself really be art?

Time and time again, my mind with its big grandiose ideas was unaware of how much I touch people just by showing my color by doing simple things like getting a coffee wearing some crazy design that was once hanging on the wall. There is something peculiar I  noticed about how people respond to my energy while I’m in motion. It can be felt, and from what other people say it feels good, light, and inspirational.

So many moments that ego of mine wanted to make up for all the times I was picked last, bullied, or overlooked. As a channel, downloading these grandiose ideas of mine without a proper team or resources lead me to hear this over and over again from prophet after prophet: “You are overthinking it. Just bring the art with you wherever you go”. 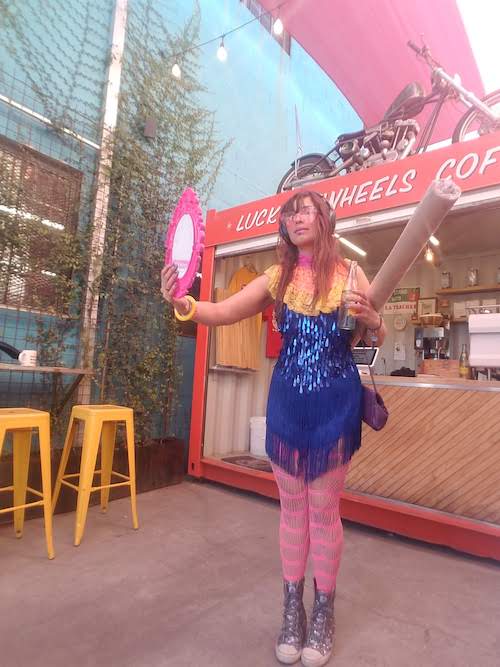 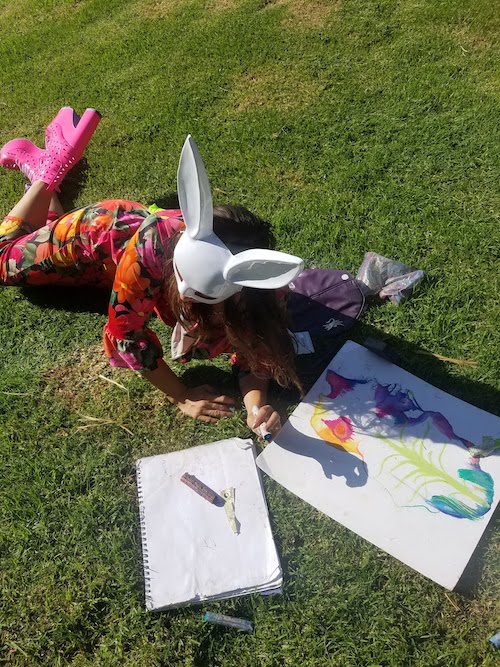 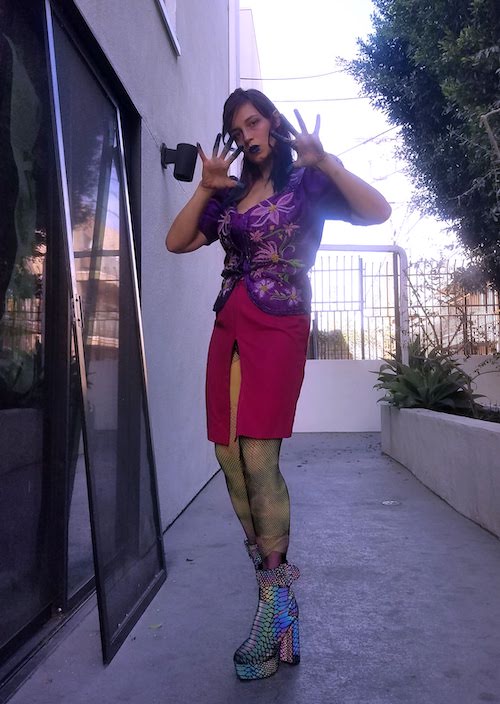 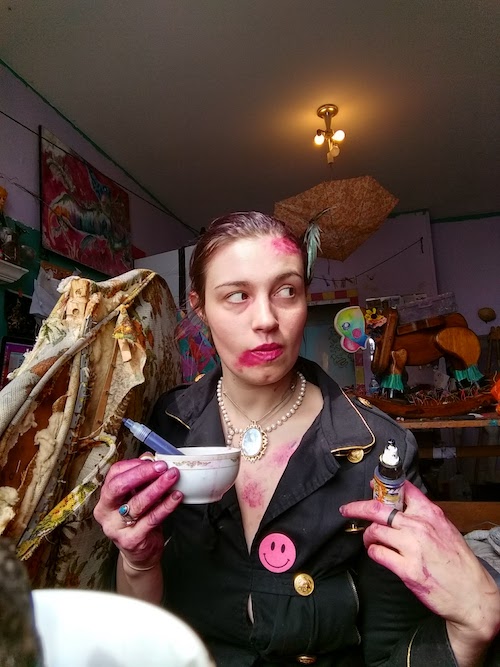 So after that message and completing a moving art protest performance series around town while running errands, I was reminded yet again about my impact. It was during the BLM protests, fresh-COVID and I was doing a charity mural in Hollywood at a business formerly called Duidough. As I was drawing a mural outside, I was also performing as a rainbow bunny swaggin’ to swampy beats from Thriftworks letting the music bust out of my portable speaker. While in a trance, I sipped my trademark teacup full of everything but tea, driving the oil pastels into the wooden boards. I was high as hell off the music when suddenly, one of the cars backed up in traffic off Selma Ave yelled at me, “THANK YOU!” I guess in all the chaos during the lockdown, people were starving for art, and this person appreciated that rare wild creative expression that was so hard to find from others in June 2020.

Sometimes it’s frustrating when I, The Contaminator enjoy putting together insane creations to only be left feeling unappreciated, then Cotton Candy just walks on by looking like a psychedelic strudel causing people to go crazy at the bus stop. They start taking photos, saying thank you’s while showering compliments, trying to pick her up when she’s just drooling and eating some peanut butter.

I have read articles about really talented artists in the early 1900s who were known in the social circles of the art realm for being charismatic while wearing crazy outfits. Unfortunately, their actual art was under-appreciated and never made it to the level of their peers. I didn’t want to become another talent that galleries just used to spruce up their social media feed and snuff at me when I asked to have their card. 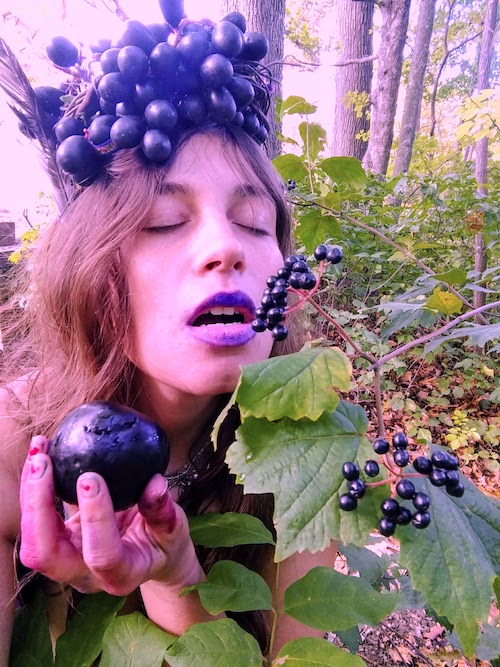 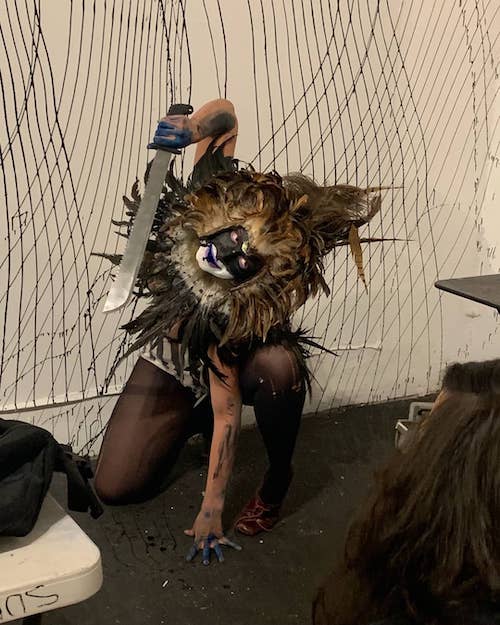 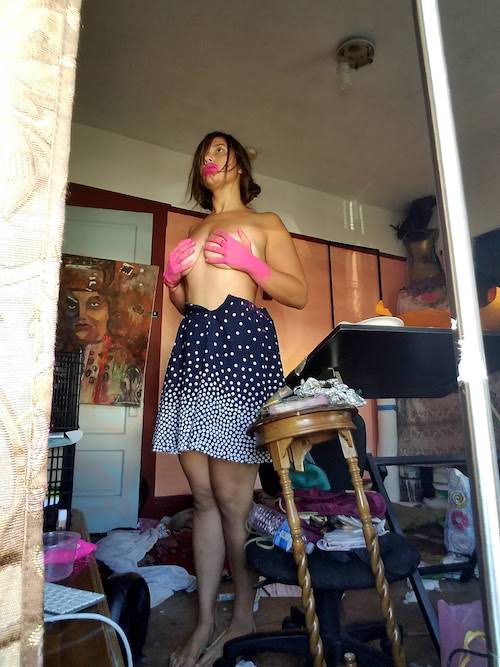 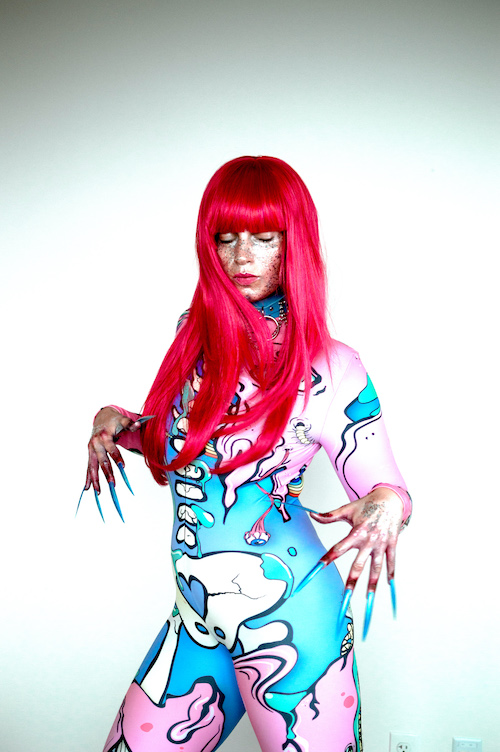 I feel everybody has a purpose and when you find that, there is an energy that translates physically into a higher frequency that becomes infectious to others. I believe, to make it successful, it’s really about utilizing that energy and aiming it at the right place at the right time. This can be challenging for big-energy individuals, especially if they practice multiple mediums. That’s why I created The Contaminator Crew, combining our spirit from one vessel and organizing them into a team of 5. This art form allows us to stay true aesthetically while cohesive at the same time. 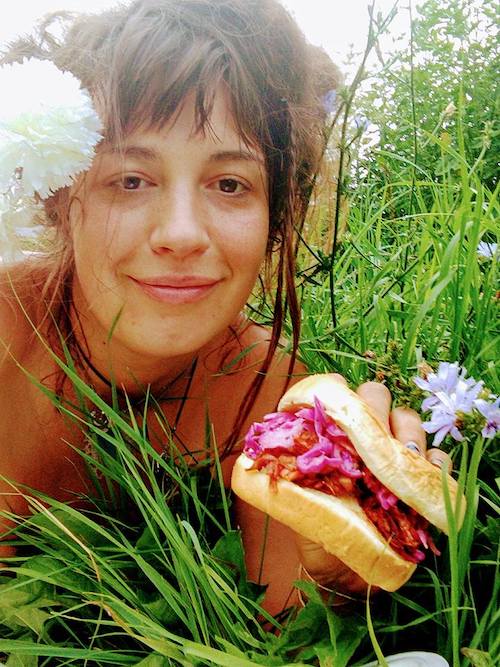 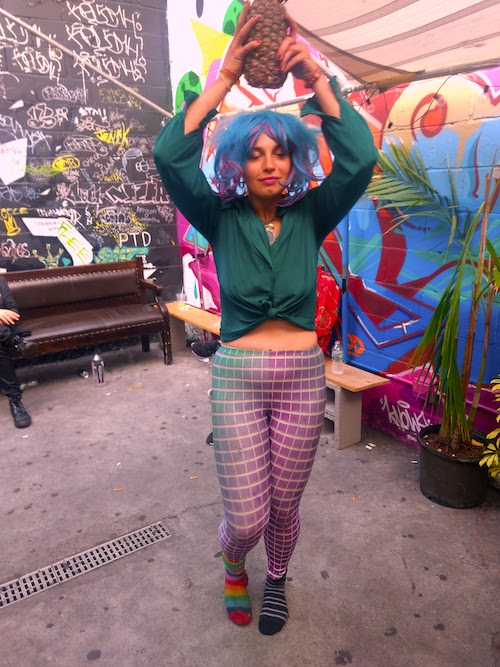 Watching my peers in the lowbrow category, I often felt different. I wanted the solo shows, the chic gallery affiliates, the interviews, and photos-ops. Miserably, what fears came with that was being known as an overdressed weirdo at art openings and nothing more. This dreadful assumption proceeded in dismissing my talent of “becoming the art”. 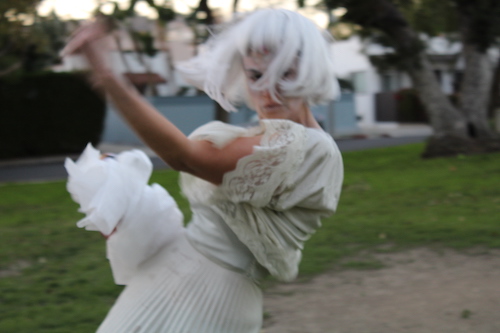 And let me tell you, some other artists do not appreciate creatives who fully embody their art. To do that, it takes an immense amount of creativity that not everybody else has. I often found that while just being my eclectic self at others’ events, there were moments when I would rub at least one artist the wrong way. An artist named Johnny I met in Detroit would come over and interrupt me every time I was networking with a known artist. He’d purposely step in-between us and hug the other person pulling them away from me like I was some vampiric leech. Those actions hurt my feelings while making it nearly impossible to network in the area. When I came to LA, I ran into him again at an opening years later, and my friend saw the whole interaction. She told me that some people are intimidated by how I become literal art, and they are honestly just envious. I would have never known that perspective if it wasn’t for her because all I could feel was a disconnection and shunning from those circles. I didn’t understand why something that I do naturally with pure intention could be so hated by others. That alone shows the amount of power I display when I follow my heart channeling a character or emotion as I did that night at Thinkspace Gallery. Haters gonna hate.

Finally, I have come to terms with my ego and the fear about what I wanted to be and who I truly am. I now completely accept that, yeah-I am not like most of them. I am not a one-dimensional artist (not that everyone else is or it’s a problem) and that’s OK. I have found an art form that works for me, which took many (8) years to get where I am today. I have managed to ground it, organize it, and promote it while making it desirable and profitable. 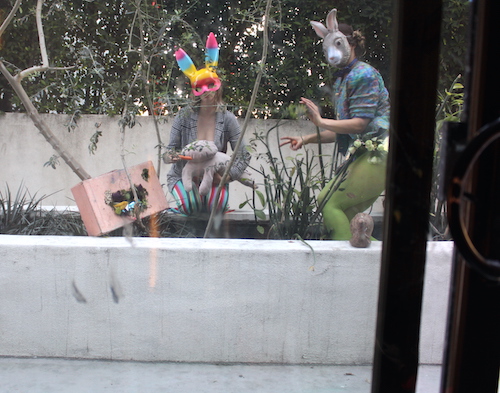 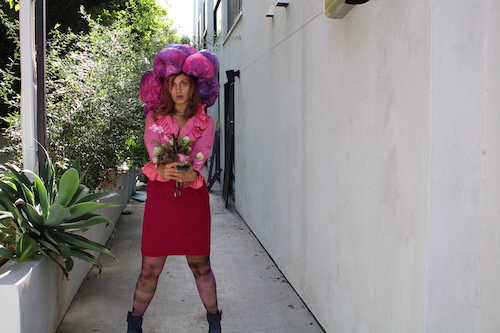 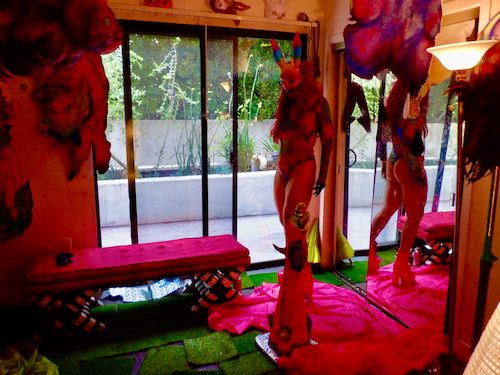 Everything I create to sell is a tangible form of art to take home, but it’s not really the art. The Contaminator Crew is the art. Everything we do, say, wear, our interactions, our Instagram is designed to promote “The Crew’s page as a multi-layered form of art. The evolution, the failures, the journey, the shows, the in-betweens. It’s a vulnerable bibliography of 1 woman who is healing her past by dissecting herself into 5 segments. In exchange, I aim to love each one of those parts until they are healed, coming back full-circle as her-“Self”. 100% committed, my entire career is a performance.

So how do we do it? How do we go from opportunity to opportunity with no manager, and so many outputs? We flow, and because we live it, people see our “performance” on the street, out dancing, shapeshifting online, offline, at a private party. We take the never-ending downloading energy and aim it at whatever source needed to, depending on the task at hand. We then shape-shift into that role and live it. 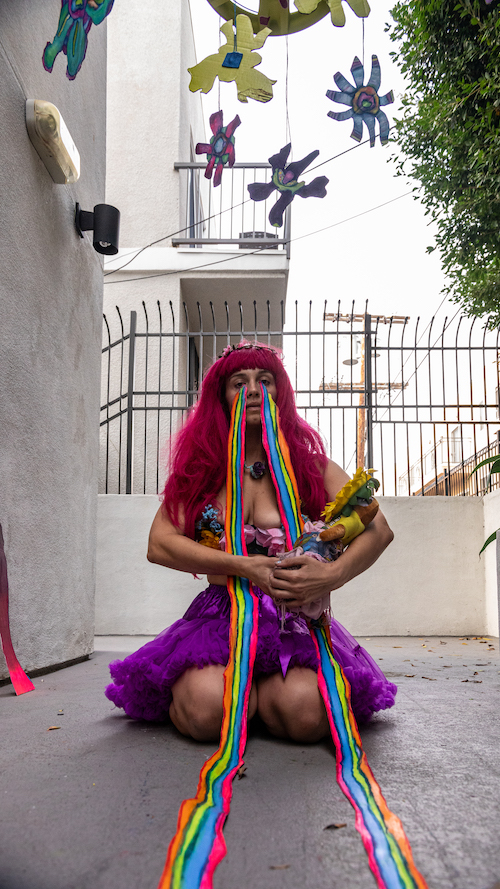 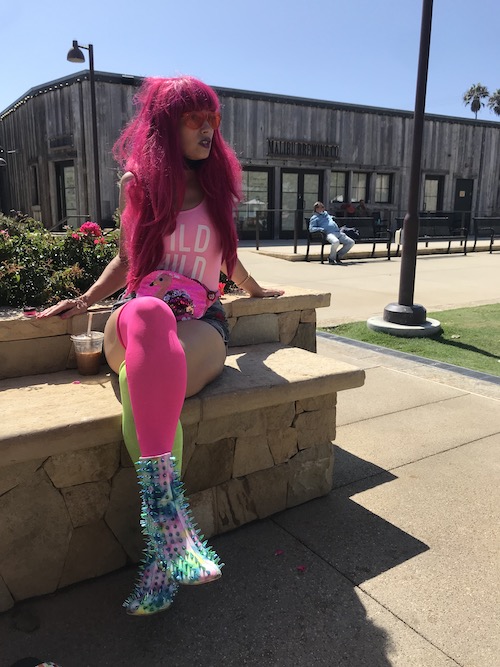 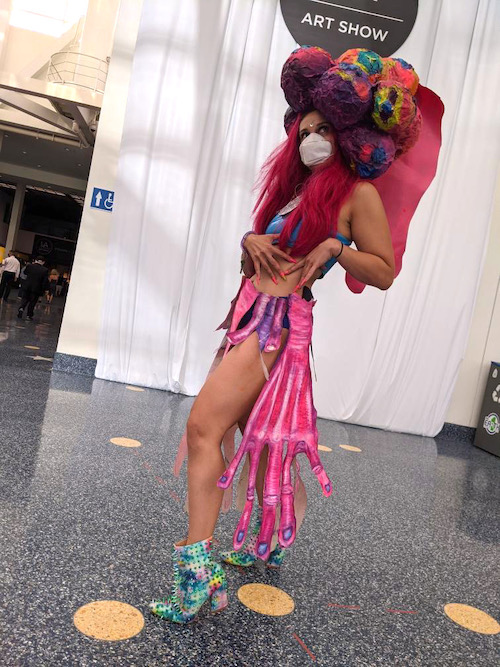 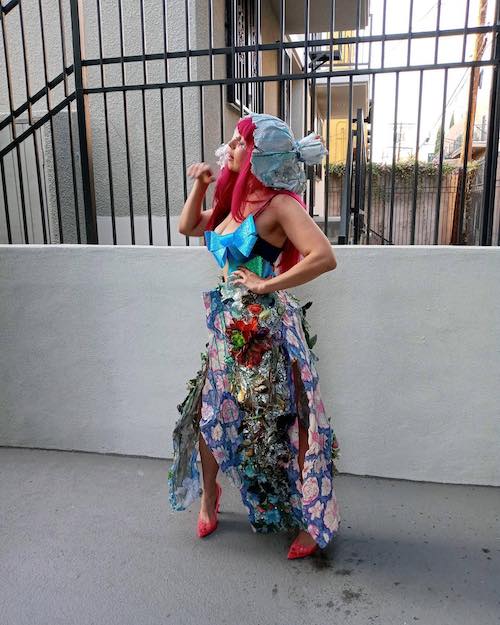 Skirt made with repurposed art from @Laurieshapiroart

So I feel it. I see it. I smell and I taste it, before I become it. I then embrace and move it, transform it to share it. It does its job, even if it’s a shitty last-minute video rather than a 4-month workpiece. It always does its job, whether it’s channeled for one person or 20,000. If it runs through me, it has a purpose. If I create it and live it, it has meaning. I release it, hoping it’s caught for whomever it was designed for, and then. it’s out of me. It’s not necessarily dead but transcended rather. I then sleep waking up with a new feeling and idea. I can’t rest at times if it’s important. Anxiety forms because someone is waiting for it, and I’d rather have it out of me for the world as soon as possible than to hold it in. That’s why sometimes the work is impulsive and of low quality.

Still feeling, we let those emotions determine if we have pink or white hair, are dancing, drawing, recording while guided by feeling and heart, less so the mind. There is a surrender that needs to take place because if the ego tries to do things out of exposure rather than heart, we are constantly reminded to get over ourselves.

Whatever it is, whether good, bad, quick, or slow, it’s real. Because I am real and we are ONE. 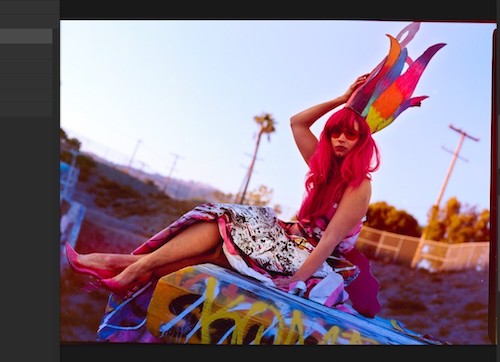 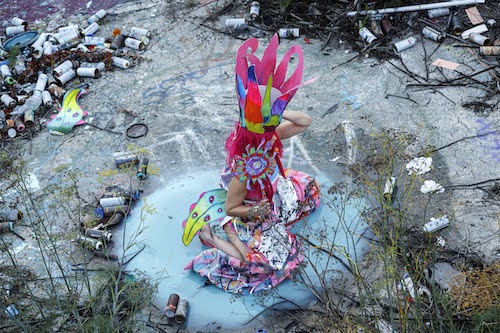 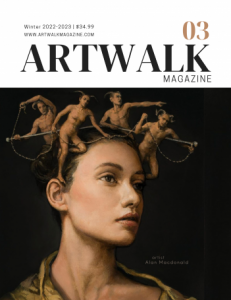 Find our Featured Article in Issue 02! 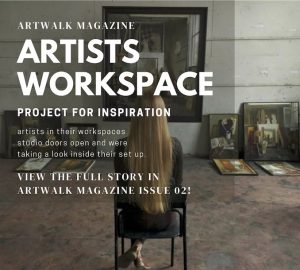 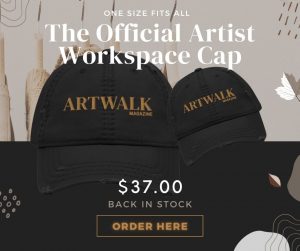